A Family Lost: Reaching Out 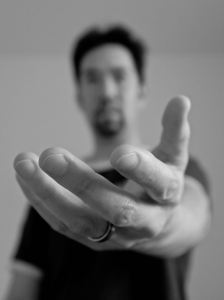 As a soon-to-be first-time father, I have been reflecting on ‘family’.  What does ‘family’ mean to me and what do I want to do with it?  Well, my situation is a bit tricky.  My father has three children, each with a different woman.  I am the middle child, with my brother being 8 years older and sister being 3 years younger.  My parents divorced when I was a one-year-old.  My mother and I moved in with my (maternal) grandfather, where I stayed for the next 25 years!

As a young boy, I would spend some weekends at my father’s house.  It was during those brief periods that I was able to see and interact with my siblings.  I cannot remember when I stopped going there, but I imagine it must have been sometime after I began playing baseball, which was around age 7 or 8.  So there really was not a lot of time for my siblings and I to form much of a relationship.

My brother did not seem to get along with my father and ended up moving out at some point to live with my paternal grandfather.  The move was not far, as our grandfather’s house was on the neighboring lot.  I am unsure of how much interaction my brother and sister had after I stopped visiting.  The three of us would not share the same time and space until our grandfather passed away in the late ’90s.

After our grandfather’s passing, there was a brief and separate sibling reunion of sorts.  My brother had learned that I was interested in music, so he took me to a couple of concerts.  One was a local Hawaiian music event, and the other was to see Mariah Carey (’98 Butterfly Tour).  I have not seen or heard from my brother since then.  I had tried to e-mail him sometime thereafter, but he had changed his address.  I still have the same e-mail address from that era active, and I wonder if there is a part of me that is still hoping that he will reach out to me someday.

I reconnected with my sister in the late ’90s, and I believe it was prior to our grandfather’s passing.  Our reconnection came via the internet revolution, where I randomly crossed paths with her in an online chatroom.  We kept in touch via e-mail and would occasionally chat via instant message as well.  Around 2001, I wanted to take things to a different level.  I wanted more of a personal interaction of sorts.  She was then attending college, and I felt that as adults, we could possibly create more of a sibling relationship without the parental barrier in our way.  We hung out a few times, and it was great!  I visited her at an art gallery where she was working at the time; I hung out at her apartment with her then-boyfriend-now-husband; I met them at a park where they were hosting a free, live music gathering (her husband is a great DJ, photographer, all-around-awesome).  They both came to see me play music when I started to gig in Waikiki.

Then it got quiet.  I moved to California in 2002, and I am not sure if we kept in touch much at all until around 2006.  I somehow learned that we both ended up in San Francisco.  We made efforts to hang out a couple of times; once to meet up for a meal at a bar/restaurant, and the second was a visit to their loft apartment for dinner.  As in the past, I had a great time and was amazed by how connected I felt in her company.

One February morning in 2015, I found myself thinking about my siblings.  Our lives are about half gone, and we still do not have a relationship.  Is this how we want to lead our lives?  I am about to start a family of my own.  How will I explain the lack of personal relationships I have with these people as I watch my child grow up with a huge branch missing from our family tree?  I decided to do something about it.  I want my child to know that his father tried.

Since I had no current information for my brother, I decided to pass on that option for now.  I looked up my sister and was amazed to see what has been going on in the past several years: a designer apparel entrepreneur, moving to another state and working with an opera company in costume design!  All that aside, just seeing her picture hit my heart.  The fire still burns inside of me, the one that wants so much to have her be a part of my life.  I knew it was time to reach out.

I drafted an e-mail, from the heart, detailing my recent thoughts on ‘family’ and how I desired to establish/re-establish a connection with her.  I praised her success and was clear in letting her know that reading about those events also made me sad.  I was sad because I missed out on parts of her life, period.  I acknowledged our past attempts to hang out and spend time together.  I admitted that I was just as much to blame for not staying in touch.  I mentioned that sometimes all it takes is for one person to get the ball rolling and change can begin.  I was hopeful that this would be our moment for that.  I shared my thoughts on the difficulty of our situation in that we basically spent our lives growing up apart from one another.  I confirmed our position as adults of free-will and that we can choose to make our relationship whatever we want, leaving our parental issues aside.  I reflected on the bond that I had felt when we had last hung out in San Francisco.  I ended the e-mail with the belief that she and I could be great friends.  I reviewed my e-mail, and my heart hurt a little.  I figured it was mostly a good thing.  It told me that what I was feeling was real.  These words, my thoughts, were real.  I was truly living in that moment, completely invested.  I took a deep breath and clicked ‘send’.

Rejected!  The e-mail address I had was not current.  I decided to look at her website for new contact information.  I went to her contact page and sent an e-mail to the address listed.  Rejected again!  I was a little frustrated at this point, having spent time drafting such a heartfelt message that was not making it beyond the screen of my laptop.  I did more investigating and found some online resume site that had yet a third e-mail address.  I tried that one next.  I waited a couple of minutes to see if the e-mail got kicked back to me.  Nothing.  I was hopeful, but unsure.  I decided to leave it be.

I waited a couple of days and had not heard back from her.  I was not sure how to take that.  Did she receive the message at all, or did she not care to respond?  I decided to keep pushing, so I found her husband online and contacted him.  I asked for his help with getting me current contact information.  He responded in less than 24 hours with a phone number.  I was excited at the opportunity to reach her directly.  I woke up the following morning at 4:30am to accommodate for the time difference between Tunis and the US.  I did not have a speech planned or anything.  I was ready to just shoot from the hip.  I called, and she did not pick up.  I left a brief message with the understanding that calling from Skype can sometimes leave a strange looking number on caller ID.  I then tried sending her a text message, letting her know my current e-mail address and that I was unsure if she had received my recent e-mail.  About an hour later, I called a second time and left another brief message just asking her to contact me.  I received an e-mail shortly thereafter, explaining that my messages had been received but she was unable to pick up because she was attending a theater performance.  She was glad to hear from me, would e-mail me again soon, and hoped I was doing well.

Well, it has been more than a week and no e-mail.  I feel disappointed.  Knowing that she received my original, heartfelt e-mail and did not respond makes me wonder if there would have been a response at all if I had not put in the extra effort to contact her via phone.  It is difficult to not read into the lack of response as a “No, I do not want a relationship with you.”  Yet, as she appeared glad to hear from me and hopes that I am doing well, it leaves me confused.  When someone reaches out to another, the least that could happen is a prompt, brief response.  Something along the lines of, “Thank you for contacting me!  I am quite busy at the moment.  I would like to provide you with a more thoughtful response soon.  Thanks again for reaching out.”  Then, make sure to follow up with a second, in-depth message soon!  That would have helped me to feel less like my heart had been stomped on.

Who knows where things will go when it comes to the relationships I have with my father and siblings.  Can they be mended?  Of course they can.  I cannot do it on my own.  We each must want it enough to make it happen.  I am not sure how to best define ‘family’.  I simply want my son to have a different experience than mine.  And he will.  For now, I will live with the knowledge that I have tried to make an effort towards change.  As far as I know, none of them are aware of my travels, my wife, or our son-to-be.  They are missing out on a lot of beautiful things.  I am a wonderful human being.

One thought on “A Family Lost: Reaching Out”